Husband gifts custom made GLS600 to wife on her birthday

Mercedes-Benz is India’s largest and one of the leading luxury car manufacturer in India. They have a variety of sedans and SUVs in their line-up in the country. Last year, Mercedes launched their first ever Maybach SUV GLS600 in the market and it received an overwhelming response from customers. We have done stories about Bollywood celebs and business tycoons who have bought this flagship SUV. Here we have a video where a husband gifted his wife a custom-made Mercedes Maybach GLS600 worth over Rs. 3 crore after a recommendation from his old IIT Bombay batchmate.

The Mercedes-Maybach has been gifted by Amit Goradia to his wife Geeta Goradia, who is the the Managing Director of Jewel Consumer Care Pvt. Ltd. on her birthday. This Maybach GLS600 is different from the ones that we have seen so far. It is specially curated for Mrs. Goradia and her husband entrused his close friend Dr. Bharat Balasubramanian to check on the vehicle while it was being made.

Dr. Balasubramanian and Mr. Amit were IIT Bombay batchmates from 1968. Dr. Balasubramanian is currently a professor and the executive director of the centre for advanced vehicle technology at the college of engineering, University of Alabama. Before this, he was working with Daimler-Benz and later became the chairman of Mercedes-Benz R&D India and former VP of Daimler group research and advanced engineering.

Dr. Balasubramanian personally documented the whole manufacturing process while following all the security protocols. As we already know, Maybach GLS600 is not manufactured in India. It is manufactured at Mercedes-Benz international SUV manufacturing plant in Tuscaloosa, Alabama, USA. At this facility, only a limited number of Maybachs are handcrafted every year. 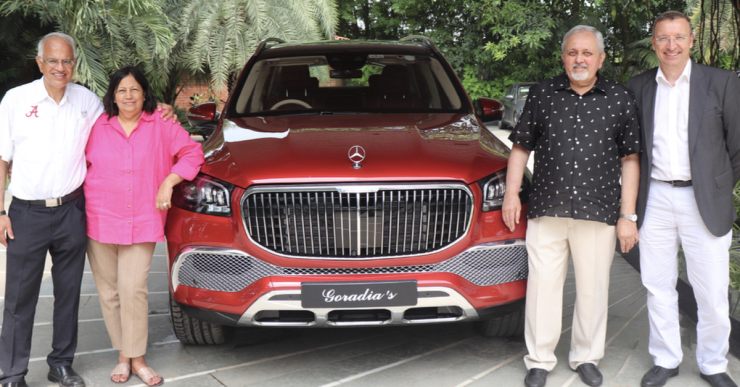 The making of this particular vehicle marks the spirits of friendship, unmatched enthusiasm, and excitement of two friends, the passion for excellence, and an endearment for brand Mercedes-Benz. This indeed is a rare and highly inspiring story of celebrating decades of friendship between two IIT-Bombay classmates, and we at the Mercedes-Benz family are extremely proud to be part of this story.

The Maybach GLS600 SUV gifted to Mrs. Goradia is finished in Hyacinth Red Metallic colour. The car was delivered to Mrs. Geeta on September 18 at Vadodara in the presence of Martin Schwenk, Dr. Balasubramanian and Mr. Amit. The SUV gets long list of customisations like fully active e-suspension, Burmester high-end 3D surround sound system, MBUX rear seat entertainment screens, Magic vision control and so on. GLS600 is currently the most expensive SUV from German manufacturer in India. As this is a custom made unit, the price of the SUV is much more than the regular Maybach. The standard GLS600 Maybach is priced at Rs. 3.06 crore, on-road Ahmedabad.

Mercedes Maybach GLS600 is a four seater luxury SUV which boasts of several luxury features. It  comes with Nappa leather upholstery, heated and ventilated seats, massager function, multi-zone climate control, panoramic sunroof, 360 degree camera, Active steering assist, touchscreen infotainment system, fully digital instrument cluster and many more features. It is powered by a 4.0 litre twin turbo V8 petrol engine that generates 550 bhp and 730 Nm of peak torque. There is a 48V EQ boost system offered with the GLS600 as well. The 48V mild-hybrid system powers an electric motor and that alone generates 22 Ps and 250 Nm of torque. It is mated to a 9-speed automatic transmission and power is sent to all the wheels.